From the official website: St. Annibale and Luisa Piccarreta

“These days will surely be full of grace for everyone”. With those words, on Sunday February 4, Father Angelo Sardone, Rogationist of the community of Bari, began his talk when the relics of Saint Annibale Maria di Francia arrived at the house of the servant of God Luisa Piccarreta. Yes, they were really days of grace and blessing and we can confirm now at the conclusion of the week of spirituality that was conceived in the context of the initiatives for the 90th anniversary of the opening of the House of the Daughters of Divine Zeal.

Saint Hannibal, with the presence of his relics, spiritually enriched the city of Corato staying for eight days at the Church Santa Maria Greca, where the tomb of the Servant of God Luisa Piccarreta is guarded. It was indeed touching to be simultaneously in front of two models of holiness linked together by an intense spiritual relationship, and united – we could say – by one single mission: to live and spread the Divine Will.

“A crusade of prayer and knowledge”, Father Angelo defined the intense program of the event. It was characterized daily by moments of prayer and formative and spiritual activities that allowed us to know more about the figure and the work of the Saint from Messina in correlation especially with Luisa, the little daughter of the Divine Will.

The venture of Annibale Maria Di Francia started in 1878 in the Avignone district, the worst slum in Messina at that time; the meeting with Francesco Zancone, a blind beggar changed his life. Father Annibale was rich, from a noble family and was admired for his culture. He could have had an extraordinary career, but he left everything and went into the midst of the slums of Messina. There he worked incessantly for the temporal and spiritual good of his neighbor, through the education and sanctification of children and boys, evangelization and relief to the poorest.

He was enraptured, since adolescence, by the gospel expression: “The harvest is plentiful, but the laborers are few; therefore pray earnestly to the Lord of the harvest to send out laborers into his harvest “(Mt 9:38; Lk 10: 2), and for this noble cause he spent all his energies.

The Rogate (Ask) thus became his life program. To this end, he founded two religious Congregations: the Rogationists and the Daughters of the Divine Zeal, and promoted numerous initiatives to spread among the faithful the awareness of the need to pray intensely for vocations.
He himself deeply loved his priesthood; He lived it consistently, and was fully convinced that it is only through the work of numerous holy priests that humanity can be saved.

For living and spreading this charism with admirable zeal, he was recognized by the Church as” distinguished Apostle of Prayer for Vocations” and Pope John Paul II called him “authentic forerunner and zealous master of modern vocation ministry”.
His message is particularly timely today, in the third millennium. The “global village” that our planet has become, confined by the communications network and political, economic and social interests, feels an urgent need of good, hard-working apostles who work for the Kingdom..

Priests, consecrated persons and all Christians are the “laborers of the Gospel” and are the fruit of prayer. It is necessary to pray to the Lord of the harvest so that many people, responding with their own generous FIAT to the call, can become workers of the harvest, new “apostles of the Divine Will”– as Jesus himself call them in Luisa’s writings – ready to work for salvation and sanctification by communicating to all the precious truths of the Divine Will.

“…once I have completed everything, I will entrust my Kingdom to my ministers, so that, like second apostles of the Kingdom of my Will, they may be the criers of It”. (Vol. XX – November 6,1926)

Therefore, we can see how St. Annibale’ s “Rogate” and Luisa’s “Fiat” interweave and walk in unison; Luisa and St. Annibale, in the plans of the Divine Providence, mutually helped and influenced each other, by communicating to each other the charisms with which the Lord had 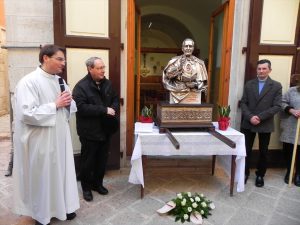 enriched their souls for the good of the Church. Pope Benedict XVI said “true friendship, in addition to being a relationship between people, it is a mutual help and spiritual journey. This is a characteristic of Saints: they cultivate friendship because it is one of the noblest manifestations of the human heart and has something divine about it”.

“Do you think that the coming of Father Di Francia, who shows so much interest and who has taken to heart the publication of what regards my Will, came by chance? No, no – I Myself disposed it. It is a providential act of the Supreme Will that wants him as first apostle of the Divine Fiat and proclaimer of It. And since he happens to be the founder of an order, it is easier for him to approach bishops, priests and people, also within his own institute, in order to proclaim the Kingdom of my Will. This is why I assist him so much and I give him special light, because in order to understand my Will it takes great graces – not little lights, but sun, to comprehend a Divine, Holy and Eternal Will, as well as great disposition on the part of the one to whom this office is entrusted”. (Vol. XX – November 6,1926)

The many surprising truths revealed to Luisa will be the inexhaustible fount from which all will draw celestial life and terrestrial happiness “…how happy they will feel – those who, with yearning, will drink in large gulps from these founts of my knowledges – Jesus said – because they contain the virtue of bringing the life of Heaven, and of banishing any unhappiness”. For this reason “I enjoy that more of my ministers get to know that there is this treasure so great, of making known the Kingdom of my Divine Will; and I use this to form the first priests of my coming Kingdom of my Fiat. My daughter, it is a great necessity to form the first priests; they will serve Me like the Apostles served Me to form my Church; and the ones who will occupy themselves with these writings in order to publish them, putting them out to print them – to make them known, will be the new evangelists of the Kingdom of my Supreme Will”. (Vol. XXIII, January 18, 1928)

It is precisely to support these new apostles of the Kingdom, within the Association Luisa Piccarreta a mission was born and takes the name Spiritual Mother for Priests. The souls who are part of it aim to spiritually adopt a priest, praying for him and sharing with him, in the Divine Will, his priestly life, a life of offering to Christ and to His Church, so that the flock entrusted to him may walk towards the Kingdom of the Fiat Voluntas Tua already on earth. And it was a very great moment on Saturday evening, when during the celebration of Holy Mass some members of the Mission wished to join the Union of Prayer for Vocations, according to the spirit that animated the life and work of St. Annibale sanctioning, also in this case, the profound spiritual bond between the Little Children of the Divine Will and the daughters and sons of Father Annibale.