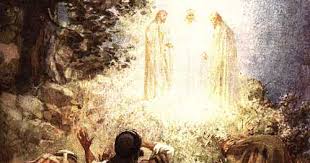 Volume 24 – April 12, 1928
Analogy between Eden and Calvary.  A kingdom cannot be formed with one act alone.  Necessity of the Death and Resurrection of Our Lord.

I was doing my round in the Divine Fiat, and was accompanying my sweet Jesus in the pains of His Passion and following Him to Calvary.

My poor mind paused to think about the harrowing pains of Jesus on the Cross; and He, moving in my interior, told me:  “My daughter, Calvary is the new Eden in which mankind was given back what it lost by withdrawing from My Will.  Analogy between Calvary and Eden:  in Eden man lost grace, on Calvary he acquires it.  In Eden, Heaven was closed to him, he lost his happiness and rendered himself the slave of the infernal enemy; here in the new Eden, Heaven is opened to him once again, he reacquires the lost peace and happiness, the devil is chained, and man is freed from his slavery.  In Eden, the Sun of the Divine Fiat darkened and withdrew, and it became always nighttime for man—symbolized by the sun that withdrew from the face of the earth during the three hours of My terrible agony on the Cross.  Unable to sustain the torment of His Creator—caused by the human will that, with great perfidy, had reduced My Humanity to that state—horrified, the sun withdrew, and as I breathed My last, it reappeared again and continued its course of light.  In the same way, the Sun of My Fiat, My pains, My Death, called back the new Sun of My Will to reign in the midst of creatures once again.

“So, Calvary formed the dawn that called the Sun of My Eternal Will to shine again in the midst of creatures.  Dawn means certainty that the sun will come out; in the same way, the dawn that I formed on Calvary assures, even though about two thousand years have passed, that it will call the Sun of My Will to reign once again in the midst of creatures.  In Eden, My Love was defeated by them; here it triumphs and conquers the creature.  In the first Eden man receives the condemnation to death of soul and body; while in the second Eden he is released from his condemnation and the resurrection of the body is reconfirmed through the resurrection of My Humanity.  There are many relations between Eden and Calvary, and what man lost there, here he reacquires.  In the Kingdom of My pains everything is given back, and the honor and the glory of the poor creature is reconfirmed by means of My pains and of My Death.

“By withdrawing from My Will, man formed the kingdom of his evils, of his weaknesses, passions and miseries; and I wanted to come upon earth, I wanted to suffer greatly, I permitted that My Humanity be lacerated, Its flesh torn to pieces, all full of wounds.  And I wanted even to die in order to form, by means of My many pains and of My Death, the Kingdom opposite to the many evils that the creature had formed for herself.

“A kingdom cannot be formed with one act alone, but with many upon many acts; and the more the acts, the greater and more glorious the kingdom becomes.  Therefore, My Death was necessary to My Love; with My Death I was to give the kiss of life to creatures, and from My many wounds I was to let all goods out, in order to form the Kingdom of goods for creatures.  So, My wounds are springs that gush with goods, and My Death is spring from which life for all gushes forth.

“And just as My Death was necessary, so was My Resurrection necessary to My Love, because by doing his will, man lost the life of My Will, and I wanted to rise again to form not only the resurrection of the body, but the resurrection of the life of My Will in it.  Had I not risen again, the creature could not have risen once again in My Fiat; she would have lacked the virtue—the bond of her resurrection in Mine, and therefore My Love would have felt incomplete.  It would have felt it could do more but was not doing it, and so I would have remained with the hard martyrdom of a love that is not complete.  If then ungrateful man does not make use of all I have done, the evil is all his own, but My Love possesses and enjoys its full triumph.”