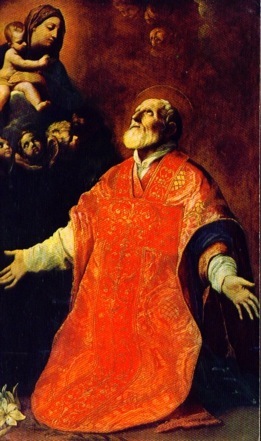 The following comes from the Patron Saints Index:

Though he was related to Italian nobility, Philip came from a poor family. His father, Francisco Neri, worked as a notary. Philip’s brother died in childhood, but his two sisters, Caterina and Elisabetta survived. Known as a pius youth, Philip was taught humanities by the Dominicans.

Moved to San Germano in 1533 to help some family with their business, and while there would escape to a local Dominican chapel in the mountains. Having received a vision that he had an apostolate in Rome, Philip cut himself off from his family, and went there.

Befriended by Galeotto Caccia who took Philip in and paid him to tutor his two sons. Wrote poetry in Latin and Italian. Studied philosophy and theology. When he tired of learning, he sold all his books and gave the money to the poor.

Began to visit and care for the sick, and impoverished pilgrims. Founded a society of like-minded folk to do the

same. Friend of Saint Ignatius of Loyola. A layman, he lived in the city as a hermit. During Easter season of 1544, while praying in the catecomb of San Sebastiano, he received a vision of a globe of fire that entered his chest, and he experienced an ecstasy that physically enlarged his heart.

With Persiano Rose, he founded the Confraternity of the Most Holy Trinity. He began to preach, with many converts. In 1550 he considered retiring to the life of a solitary hermit, but received further visions that told him his mission was in Rome. Later he considered missionary work in India, but further visions convinced him to stay in Rome.

Entered the priesthood in 1551. He heard confessions by the hour, could tell penitents their sins before they confessed, and had the gift of conferring visions. He began working with youth, finding safe places for them to play, becoming involved in their lives.

Pope Gregory XIV tried to make him a cardinal, but Philip declined. His popularity was such that he was accused of forming his own sect, but was cleared of this baseless charge. In 1575 he founded the Congregation of the Oratory (Oratorians, a group of priests dedicated to preaching and teaching, but which suffered from accusations of heresy because of the involvement of laymen as preachers. In later years he was beset by several illnesses, each of which was in turn cured through prayer.

“Cheerfulness strengthens the heart and makes us persevere in a good life. Therefore the servant of God ought always to be in good spirits.” – Saint Philip Neri

Volume 10 – January 17, 1911
The civilian leaders listen to Jesus more than the ecclesiastical leaders.

The houses of reunion for priests will be called “Houses of the Resurrection of the Faith.”

Continuing in my usual state, my always lovable Jesus came, but so afflicted and so burning with love, that He was restless and asked for refreshment. And throwing His arms around my neck, He told me: “My daughter, give Me love – this is the sole and only refreshment to calm my restlessness of love.”

Then He added: “Daughter, what you wrote about the reunions of priests is nothing but a process that I am making with them. If they listen to Me – fine. But if they don’t, since the leaders of the ecclesiastics will not listen to Me because they too are bound by the laces of interest, and are slaves of human miseries, almost lapping them up – instead of dominating over those miseries, of interest, of high positions and the like, the miseries dominate them; therefore, since they are deafened by what is human, I will be neither understood nor listened to – I will turn to the civilian leaders, who will listen to Me more easily. Because of their desire to see the priest humiliated, and also because maybe these are a little more stripped than the ecclesiastics themselves, my voice will be more listened to; and what they do not want to do out of love, I will make them do by necessity and by force, and I will make the government take away what is left to them.”

And I: ‘My highest and only good, what will be the name to be given to these houses, and what the rules?’

And He: “The name will be: The Houses of the Resurrection of the Faith.

As for the rules, they can use the same rules as the Oratory of Saint Philip Neri.”

Then He added: “Tell Father B. that you will be the organ and he the sound for this work. If he will be mocked and disliked by those who have their interests, the good and the few true good will comprehend the necessity and the truth that he announces, and will make it a duty of conscience to get down to work. Besides, if he is mocked, he will have the honor of becoming more similar to Me.” Fiat!