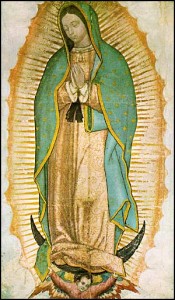 Our Celestial Mother: “Your Mama felt ignited with love, and echoing the love of my Creator, I wanted to form one single sea of love, so that the Word might descend upon earth within it. My prayers were incessant, and while I was praying in my little room, an angel came, sent from Heaven as messenger of the great King. He came before me, and bowing, he hailed me: “Hail, O Mary, our Queen; the Divine Fiat has filled you with grace. He has already pronounced His Fiat, for He wants to descend; He is just behind my shoulders, but He wants your Fiat to form the fulfillment of His Fiat.”

At such a great announcement, so much desired by me – although I had never thought I was to be the chosen one – I was stupefied and I hesitated one instant. But the angel of the Lord told me: “Do not fear, our Queen, for you have found grace before God. You have conquered your Creator; therefore, to complete the victory – pronounce your Fiat.”

I pronounced my Fiat, and – oh, marvel! The two Fiats fused together and the Divine Word descended into Me. My Fiat, receiving the same value as the Divine Fiat, from the seed of my humanity, formed the tiny little humanity which was to enclose the Word, and so the great prodigy of the Incarnation was accomplished.” (From “The Virgin Mary in the Kingdom of the Divine Will”; Day 19)

Our Celestial Mother: “…So I departed from Nazareth, accompanied by Saint Joseph, facing a long journey, and crossing mountains to go visit Elisabeth in Judea, who, in her advanced age, had miraculously become a mother.

I went to her, not to make a simple visit, but because I burned with the desire to bring her Jesus. The fullness of grace, love and light which I felt in me, pushed me to bring, to multiply – to increase a hundredfold the life of my Son in creatures.

Yes, my child, the love of Mother which I had for all men, and for you in particular, was so great that I felt the extreme need to give my dear Jesus to everyone, that all might possess Him and love Him. The right of Mother, given to me by the Fiat, enriched me with such power as to multiply Jesus as many times as there are creatures who want to receive Him. This was the greatest miracle I could perform: to have Jesus ready to give to whomever desired Him. How happy I felt!

How I wish that you too, my child, in approaching and visiting people, would always be the bearer of Jesus, capable of making Him known, and yearning to make Him loved.”

“Dearest child, the Divine Will does great and unheard-of things wherever It reigns. If I worked many prodigies, it was because It had Its royal place in me. If you let the Divine Will reign in your soul, you too will become the bearer of Jesus to the creatures – you too will feel the irresistible need to give Him to all!” (From “The Virgin Mary in the Kingdom of the Divine Will”; Meditation 1, Appendix)

3rd The Birth of Jesus (Love of God)

Luisa: “As I was in my usual state, I found myself outside of myself; after wandering around, I found myself in a cave, and I saw the Queen Mama giving birth to Little Baby Jesus. What a wonderful prodigy! It seemed that both Mother and Son were transformed into most pure light. But in that light one could see very clearly the human nature of Jesus containing the Divinity within Itself, and serving as a veil to cover the Divinity; in such a way that, in tearing the veil of human nature, He was God, while covered by that veil, He was man. Here is the prodigy of prodigies: God and Man, Man and God! Without leaving the Father and the Holy Spirit – because true love never separates – He comes to live in our midst, taking on human flesh. Now, it seemed to me that Mother and Son, in that most happy instant, remained as though spiritualized, and without the slightest difficulty Jesus came out of the Maternal womb, while both of them overflowed with excess of Love. In other words: those Most Pure bodies were transformed into light, and without the slightest impediment, Light Jesus came out of the Light of the Mother, while both One and the Other remained whole and intact, returning, then, to their natural state.

Who can tell of the beauty of the Little Baby, who, in the moment of His birth, transfused, also externally, the rays of the Divinity?” (From Vol. 4; December 25, 1900)

4th The Presentation and Consecration of Jesus in the Temple (Obedience)

Our Celestial Mother: “Forty days from the birth of little King Jesus are about to sound – when the Divine Fiat calls us to the temple in order to fulfill the law of the Presentation of my Son. So, we went to the temple. It was the first time that we went out together with my sweet baby. A vein of sorrow opened in my heart: I was going to offer Him as victim for the salvation of all! We entered the temple, and first we adored the Divine Majesty; then we called the priest, and placing Him in his arms, I made the offering of the celestial baby to the eternal Father – offering Him in sacrifice for the salvation of all. The priest was Simeon, and as I placed Him in his arms, he recognized that He was the Divine Word and exulted with immense joy; and after the offering, assuming the attitude of prophet, he prophesied all my sorrows… Oh, how the Supreme Fiat sounded over my maternal heart – thoroughly, with vibrating sound, the cruel tragedy of all the pains of my little Son! But that which pierced me the most were the words that the holy prophet said to me: “This dear baby will be the salvation and ruin of many, and will be the target of contradictions.”

If the Divine Will had not sustained me, I would have died instantly of pure pain. But It gave me life, and used it to form in me the Kingdom of sorrows, within the Kingdom of Its Will. Therefore, in addition to the right of Mother which I had over all, I acquired the right of Mother and Queen of all Sorrows. Ah, yes, with my sorrows, I acquired the little coin to pay the debts of my children, and even those of the ungrateful children…

“Now, listen to your Mama: in your sufferings, in the painful encounters which are not lacking for you, never lose heart; but with heroic love let the Divine Will assume Its royal place in your pains, so that It may convert them into little coins of infinite value, with which you will be able to pay the debts of your brothers – to ransom them from the slavery of the human will, and make them enter again, as free children, into the Kingdom of the Divine Will.” (From “The Virgin Mary in the Kingdom of the Divine Will”; Day 23)

5th The Finding of Jesus in the Temple (Joy)

Our Celestial Mother: “…After three days of most bitter sighs, tears, anxieties and fears, we entered the temple. I was all eyes and looked everywhere, when, finally, overcome with jubilation, I saw my Son in the midst of the doctors of the law! He was speaking with such wisdom and majesty as to make those who were listening remain enraptured and amazed. Only in seeing Him, I felt life come back to me, and soon I understood the secret reason of His being lost.

And now, a little word to you, dearest child. In this mystery, my Son wanted to give to me and to you, a sublime teaching. Could you perhaps assume that He was ignoring what I was suffering?

On the contrary, my tears, my searching, and my cruel and intense sorrow, resounded in His heart. Yet, during those hours, so painful, He sacrificed to the Divine Will, His own Mama, the one whom He loves so much, in order to show me how I too, one day, was to sacrifice His own Life to the Divine Will.

In this unspeakable pain, I did not forget you, my beloved one. Thinking that it would serve as an example for you, I kept it at your disposal, so that you too, at the appropriate time, might have the strength to sacrifice everything to the Divine Will. As Jesus finished speaking, we approached Him reverently, and addressed Him with a sweet reproach: “Son, why have you done this to us?” And He, with divine dignity, answered us: “Why did you look for me? Did you not know that I came to the world to glorify my Father?” Having comprehended the high meaning of His answer, and adored in it the Divine Will, we returned to Nazareth.

Child of my maternal heart, listen. When I lost my Jesus, the pain I felt was so very intense; yet, a second one added to this – that of losing you. In fact, in foreseeing that you would have gone far from the Divine Will, I felt at one time deprived of the Son and of the daughter, and so my maternity suffered a double blow.

My child, when you are in the act of doing your own will rather than that of God, think that by abandoning the Divine Fiat, you are about to lose Jesus and me, and fall into the kingdom of miseries and vices.

Keep then, the promise you made me – to remain indissolubly united to me – and I will grant you the grace of never again letting you be dominated by your will, but only by the Divine.” (From “The Virgin Mary in the Kingdom of the Divine Will”; Meditation 5, Appendix)