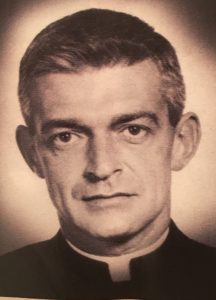 n countless brave Catholic chaplains serving the U.S. Armed Forces since the Revolutionary War.  One heroic example who is honored every year on the anniversary of his death is Father Vincent R. Capodanno, a Maryknoll priest who was killed in Vietnam on September 4, 1967, as he gave physical and spiritual assistance to the dying Marines of the 1st Marine Division.  Father Capodanno posthumously received the Congressional Medal of Honor and was officially proclaimed a Servant of God by the Catholic Church in 2006, formerly initiating his cause for sainthood.

The annual memorial Mass for Father Capodanno was celebrated September 6, 2011 at the Basilica of the National Shrine of the Immaculate Conception in Washington, D.C., and attended by active-duty and retired members of the armed forces, civilians, and many Catholic military chaplains.

In his homily, Archbishop Timothy P. Broglio pointed out that among the scores of Navy chaplains, only two have received the Medal of Honor:  Jesuit Father Joseph O’Callahan and Father Capodanno.

“They were men who never forgot the specificity of what they brought to others as Catholic priests, and yet still served all who sought their counsel comfort and ministry,” said Archbishop Broglio.  “It is that realization that permitted Father Capodanno to defy logic and remain under fire to minister to those entrusted to his pastoral care.  He knew that he brought them something no other chaplain could:  the healing presence of the risen Lord who entrusted his sacraments, his life, to the Church.”

The archbishop encouraged those in attendance at the Mass to look to Father Capodanno as an example and source of inspiration to all the faithful, especially the Catholic chaplains serving in the armed forces.

“Men and women like Father Capodanno, afire with the love of Christ, challenge us to live the Gospel and to teach all people to live as brothers and sisters.  The quest for peace still stirs our hearts,” he said.