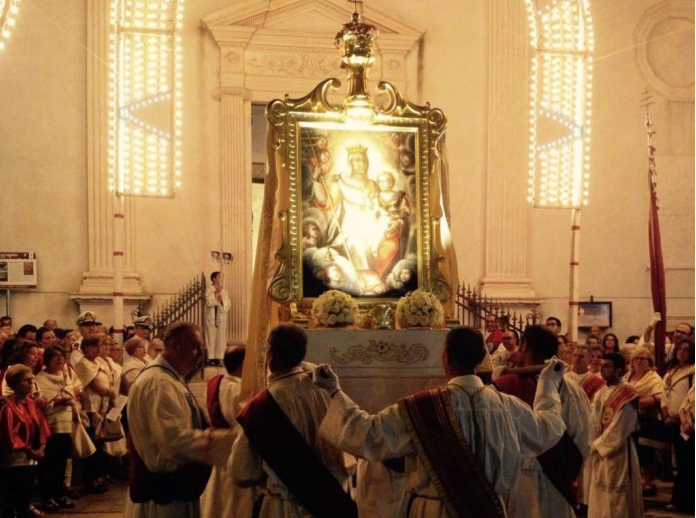 Yesterday was celebrated the feast of Santa Maria Greca – proclaimed Principal Protector of Corato in 1956 by Pope Pius XII on the occasion of the 3rd centenary of the apparition, as it is stated in the plaque next to the church, but always dear to the people of Corato – organized by the  Archconfraternity of the same name led by Pasquale Nocca.

The sober and planned festivities participated in, besides the preparatory novena,  was particularly Monday night’s prayer vigil in memory of the victims of the rail accident of July 12, 2016, and yesterday’s three Eucharistic celebrations.

One of celebrations, that of 11 am, was presided over by Mons. Giannotti, a vicar general, and was followed by the traditional Supplication to Our Lady at 12 o’clock, when the harmonious sound of the bell, 361 years ago, resounded freeing Corato from the plague.

The Icon of the Protector – to be more precise the wooden board on which the image of the Black Madonna is imprinted with the Greek pastoral and preserved in the crypt of the same name – was taken in procession along the city street after the Eucharistic celebration in the sacred church. 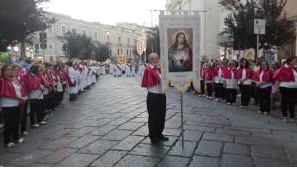 The members of the Sacred Heart Association of Jesus, who opened the procession

The procession, begun by some members of the Association of the Sacred Heart of Jesus, saw a distinguished participation of the faithful who did not just look at it from the edge of the sidewalks, but welcoming the invitation of Father Sergio Pellegrini, parish priest of St. Maria Greca, followed the icon praying Rosary and reflecting on some passages from the writings of Servant of God Luisa Piccarreta.  Also present were representatives of the many Catholic associations in the city and the political authorities.

Music played by Bitonto’s Bass Band also accompanied the return to the Church of the Icon of the Protector, greeted by the festive clapping of hands of her Children, aware of being sinners, as  the Hymn dedicated to her is repeated, but who as children invoke Her prayer of intercession and celestial protection.

The festivities this year also include a clarinet concert by the Quartet Melody, a chamber ensemble formed by four  clarinetists from Corato, who will be playing on Sunday, July 23 in the church of Santa Maria Greca in memory of the victims of the railway disaster.

Domenico Varesano, Vicenzo Di Puppo, Cataldo Taccardo and Vincenzo Catalano – who joined together in January 2016 with the aim of raising the city of Corato’s awarness of music culture – will perform the famous “Pavane for a dead infant” by Ravel Maurice, “Ammerland” By Jacob De Haan, “The Mission (Gabriel’s Oboe)” by Ennio Morricone, “7th Symphony 2nd Movement” by Ludwing van Beethoven, “Oblivion” by Astor Piazzolla, “River Flows in You” by Yiruma.