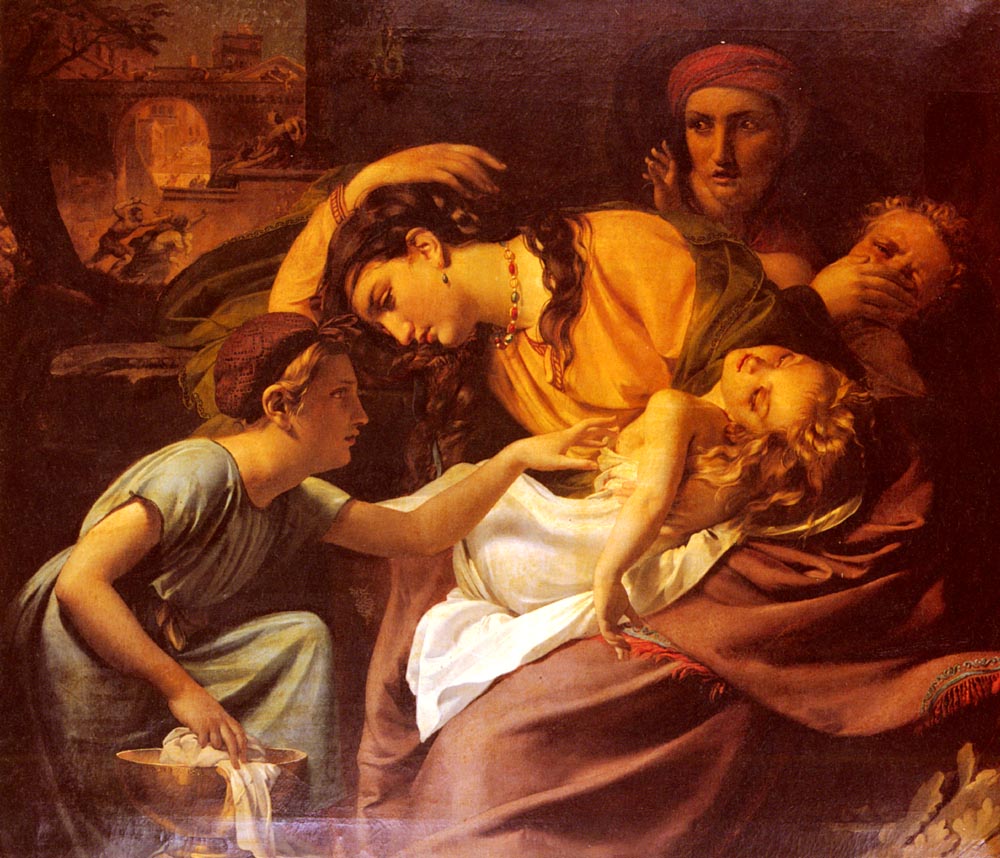 The Queen of Heaven in the Kingdom of the Divine Will.

A Cruel Tyrant. Little King Jesus is brought by His Mama and by Saint Joseph into a foreign Land, where They go as Poor Exiled Ones. Return to Nazareth.

The soul to her Queen, overwhelmed by Sorrow:
My sovereign Mama, your little child feels the need to come to your maternal knees to keep You a little company. I see  your face veiled with sadness, and a few fleeting tears flowing from your eyes. The sweet little Baby is shivering, and sobbing, He cries. Holy Mama, I unite my pains to yours, to comfort You and to calm the crying of the Celestial Baby. But, O please, my Mama, do not refuse to reveal to me your secret. What is it that is so gloomy for my dear Little Baby?

Lesson of the Mother Queen:
My dearest child, today the Heart of your Mama is swollen with love and with sorrow, so much so, that I cannot refrain from crying. You know of the coming of the Magi Kings, who caused rumor in Jerusalem, asking about the new King. And cruel Herod, for fear of being removed from his throne, has already given the mandate to kill my sweet Jesus, my dear life, together with all the other children.
My child, what pain! The One who has come to give life to all, and to bring into the world the new era of peace, of happiness, of grace…they want to kill Him! What ingratitude! What perfidy! Ah, my child, to what extent the blindness of the human will reaches! To the extent of becoming ferocious, of tying the hands of the Creator Himself, and of making itself the owner of the One who created it. Give Me your compassion, my child, and try to calm the crying of the sweet Baby. He cries because of human ingratitude, because, only a newborn, they want Him dead; and in order to save Him, we are forced to flee. Dear Saint Joseph has already been advised by the Angel to leave for a foreign land. Accompany us, dear child; do not leave us alone, and I will continue to give you my lessons on the great evils of the human will. Now, you must know that as man withdrew from the Divine Will, he broke off with his Creator. Everything on earth had been made by God for him – everything was his; but man, by not wanting to do the Divine Will, lost all rights, and one could say that he did not know where to place his foot. So He became a poor exiled one, a pilgrim who could not have a permanent residence; and this, not only for the soul, but also for the body. All things became mutable for poor man; and if he did possess any fleeting thing, it was by virtue of the foreseen merits of this Celestial Baby. This, because the whole magnificence of Creation was destined by God for all those who would do His Will and live in Its Kingdom. All others, if they manage to take anything, are the true petty thieves of their Creator; and with reason: they do not want to do the Divine Will, but they want the goods which belong to It?
Now, dear child, listen to how much this dear Baby and I love you: at the first dawn of His life, He goes into exile, and into a foreign land, in order to free you from the exile in which your human will placed you; to call you to live, not in a foreign land, but in your fatherland – the Kingdom of the Supreme Fiat – which was given to you when you were created. Child of my Heart, have pity on the tears of your Mother, and on the tears of this sweet dear Baby – crying, We ask you never to do your will. But We beg you, We implore you: come back into the bosom of the Divine Will, which so much longs for you! Now, dear child, in the midst of the sorrow for human ingratitude, and in the midst of the immense joys and happinesses that the Divine Fiat gave us and the feast that all Creation made for the sweet Baby, the earth became green and flowery again under our steps, to give homage to its Creator. The sun fixed on Him, and praising Him with its light, it felt honored to give Him its light and heat. The wind caressed Him; the birds, almost like clouds, alighted around us, and with their trills and songs, made the most beautiful lullabies for the dear Baby, to calm His crying and favor His sleep. My child, since the Divine Will was in us, we had power over everything.
So we arrived in Egypt, and after a long period of time, the Angel of the Lord told Saint Joseph that we should return to the house of Nazareth, because the cruel tyrant had died. So we repatriated to our homeland. Now, Egypt symbolizes the human will – a land full of idols; and wherever Baby Jesus passed, He would knock down these idols and cast them into hell. How many idols does the human will possess! Idols of vainglory, of self-esteem and of passion, which tyrannize the poor creature! Therefore, be attentive; listen to your Mama. I would make any sacrifice never to let you do your will; and I would also lay down my life, to give you the great good of living always in the bosom of the Divine Will.

The soul:
Most sweet Mama, how much I thank You for making me understand the great evil of the human will. And so, for the sake of the sorrow You suffered in the exile of Egypt, I ask You to free my soul from the exile of my will, and to let me repatriate to the dear fatherland of the Divine Will.

Little Sacrifice:
Today, to honor Me, you will offer your actions united with mine, in act of gratitude to the Holy Baby, praying Him to enter into the Egypt of your heart to change it completely into Will of God.

Ejaculatory Prayer:
My Mama, enclose little Jesus in my heart, that He may reorder it all in the Divine Will.