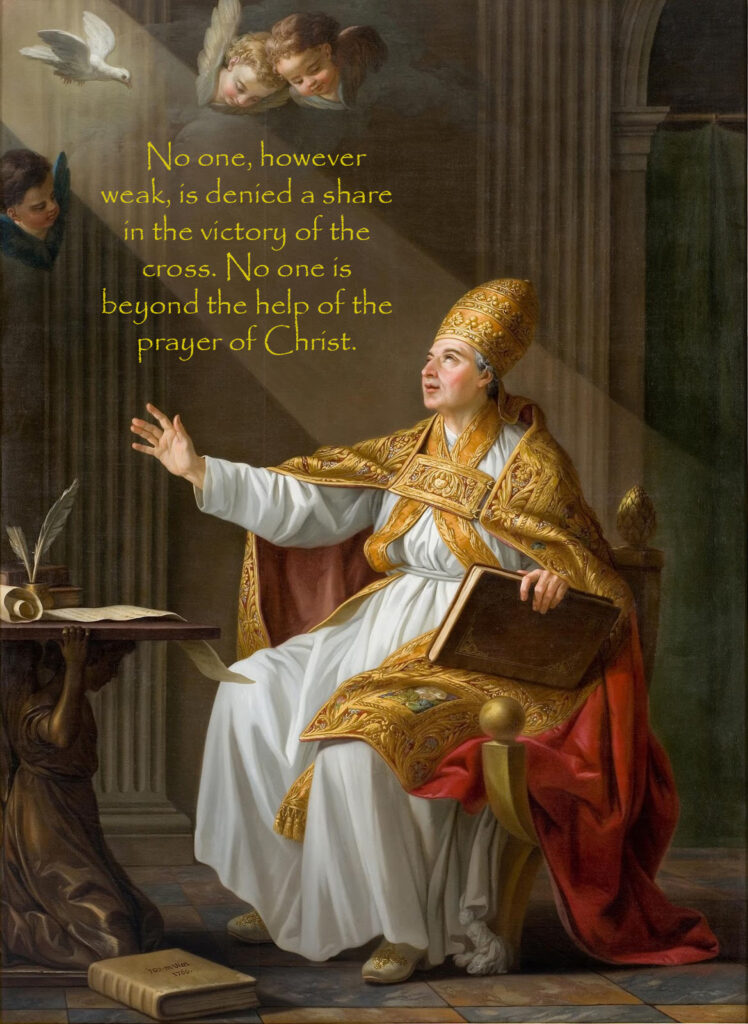 From a Sermon of Saint Leo the Great, Pope
Contemplating the Lord’s passion

True reverence for the Lord’s passion means fixing the eyes of our heart on Jesus crucified and recognizing in him our own humanity.

The earth – our earthly nature – should tremble at the suffering of its Redeemer. The rocks – the hearts of unbelievers – should burst asunder. The dead, imprisoned in the tombs of their mortality, should come forth, the massive stones now ripped apart. Foreshadowing’s of the future resurrection should appear in the holy city, the Church of God: what is to happen to our bodies should now take place in our hearts.

No one, however weak, is denied a share in the victory of the cross. No one is beyond the help of the prayer of Christ. His prayer brought benefit to the multitude that raged against him. How much more does it bring to those who turn to him in repentance.

Ignorance has been destroyed, obstinacy has been overcome. The sacred blood of Christ has quenched the flaming sword that barred access to the tree of life. The age-old night of sin has given place to the true light.

The Christian people are invited to share the riches of paradise. All who have been reborn have the way open before them to return to their native land, from which they had been exiled. Unless indeed they close off for themselves the path that could be opened before the faith of a thief.

The business of this life should not preoccupy us with its anxiety and pride, so that we no longer strive with all the love of our heart to be like our Redeemer, and to follow his example. Everything that he did or suffered was for our salvation: he wanted his body to share the goodness of its head.

First of all, in taking our human nature while remaining God, so that the Word became man, he left no member of the human race, the unbeliever excepted, without a share in his mercy. Who does not share a common nature with Christ if he has welcomed Christ, who took our nature, and is reborn in the Spirit through whom Christ was conceived?

Again, who cannot recognize in Christ his own infirmities? Who would not recognize that Christ’s eating and sleeping, his sadness and his shedding of tears of love are marks of the nature of a slave?

It was this nature of a slave that had to be healed of its ancient wounds and cleansed of the defilement of sin. For that reason the only-begotten Son of God became also the son of man. He was to have both the reality of a human nature and the fullness of the godhead.

The body that lay lifeless in the tomb is ours. The body that rose again on the third day is ours. The body that ascended above all the heights of heaven to the right hand of the Father’s glory is ours. If then we walk in the way of his commandments, and are not ashamed to acknowledge the price he paid for our salvation in a lowly body, we too are to rise to share his glory. The promise he made will be fulfilled in the sight of all: Whoever acknowledges me before men, I too will acknowledge him before my Father who is in heaven.