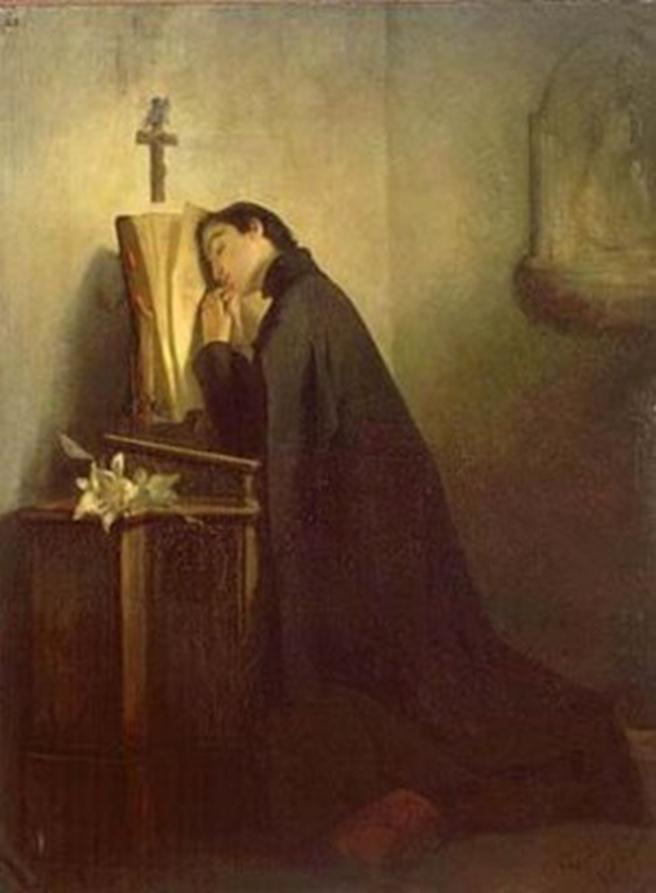 Link to a Prayer to BVM by St. Aloysius

Holy Mary, My Queen I commend myself to Your Blessed Protection and Special Keeping and to the Bosom of Your Mercy this day and every day of my life and the hour of my death. I entrust to you all my hopes and consolations all my trials and miseries my life and the end of my life that through Your Most Holy Intercession and Your Merits all my actions may be ordered and directed according to Your Will and that of Your Son. Amen

Saint Aloysius, Luigi to call him by his proper name, may well be the most loved Jesuit in history. Luigi contracted the plague from those whom he was nursing. He foresaw his own death and asked Our Lord that he might die within the Octave of Corpus Christi. He died, in fact, on the Octave Day of Corpus Christi with the name of Jesus on his lips.

Afterwards, Heaven opened; it seemed that a very great feast was being prepared.  At that very moment a young man of lovely appearance came down from Heaven, all dazzling with fire and flames.  Jesus told me:  “Tomorrow is the feast of my dear Aloysius – I must go attend.”  And I:  ‘And so You leave me alone – what shall I do?’  And He:  “You too will come.  Look at how beautiful Aloysius is; but the greatest thing in him, which distinguished him on earth, was the love with which he operated.  Everything was love in him – love occupied him interiorly, love surrounded him externally; so, one can say that even his breath was love.  This is why it is said of him that he never suffered distraction – because love inundated him everywhere, and with this love he will be inundated eternally, as you see.”

And in fact it seemed that the love of Saint Aloysius was so very great, as to be able to burn the whole world to ashes.  Then, Jesus added:  “I stroll over the highest mountains, and there I form my delight.”  Since I did not understand the meaning of it, He continued:  “The highest mountains are the Saints who have loved Me the most, and in them I form my delight, both when they are on earth, and when they pass into Heaven.  So, everything is in love.”  After this, I prayed Jesus to bless me and those whom I was seeing at that moment; and He, giving His blessing, disappeared.

Volume 19 June 21, 1926; Saint Aloysius was a flower that bloomed from the Humanity of Our Lord, made bright by the rays of the Divine Will.  The souls who will possess the Kingdom of the Divine Will will have their roots within Its Sun.

This morning, having received Holy Communion, I received It as usual in the Most Holy Will of God, offering It to my dear Saint Aloysius – not only the Communion, but all the goods contained in the Most Holy Will of God, for his accidental glory.  Now, while doing this, I saw that all the goods contained in the Supreme Volition, like many rays of light, rays of beauty and of multiple colors, inundated the dear Saint, giving him an infinite glory.  And my sweet Jesus, moving in my interior, told me:  “My daughter, Aloysius is a flower and a Saint bloomed from the earth of my Humanity and made bright by the reflections of the rays of the Sun of my Will.  In fact, though, holy, pure, noble and united hypostatically to the Word, my Humanity was earth; and Aloysius, more than flower, bloomed from my Humanity – pure, holy, noble, possessing the root of pure love, in such a way that in each leaf of his flower one can see written, ‘love’.  But what renders him more beautiful and brilliant are the rays of my Will, to which he was always submitted – rays which gave such development to this flower as to render it unique on earth and in Heaven.  Now, my daughter, if Aloysius is so beautiful because he bloomed from my Humanity, what will be of you and of all those who will possess the Kingdom of my Will?  These flowers will not bloom from my Humanity, but will have their roots within the Sun of my Will.  In It is formed the flower of their life; they grow and bloom in the very Sun of my Volition which, jealous of these flowers, will keep them eclipsed within Its own light.  In each petal of these flowers one will see, written, all the specialties of the divine qualities; they will be the enchantment of all Heaven, and all will recognize in them the complete work of their Creator.”

And while He was saying this, my sweet Jesus opened His breast and showed, inside it, an immense Sun, in which He was to plant all these flowers; and His love and jealousy toward them was so great, that He would not let them bloom outside His Humanity, but inside Himself.

Having received Holy Communion, I was offering It for the glory of Saint Aloysius, and I offered, as a present for him, everything that Our Lord had done in His Divine Will with His mind, with His words, works and steps, for the accidental glory of Saint Aloysius on his feast day.  Now, while I was doing this, my sweet Jesus, moving in my interior, told me:  “My daughter, a more beautiful present you could not give to dear Saint Aloysius on the day of his feast.  As you were offering your Communion and all my acts done in my Divine Will, so many suns were formed for as many acts as I did in It while being on earth; and these suns invested Saint Aloysius, in such a way that he received so much accidental glory from the earth, that he could not receive more.  Only the offerings of acts done in my Divine Will have the virtue of forming their suns, because, containing the fullness of light, it is no wonder that It converts into suns the human acts done in It.”

Prayers offered at the Memorial Mass of St Aloysius

O GOD, GIVER OF HEAVENLY GIFTS,
WHO IN SAINT ALOYSIUS GONZAGA
JOINED PENITENCE TO A WONDERFUL INNOCENCE OF LIFE,
GRANT, THROUGH HIS MERITS AND INTERCESSION,
THAT, THOUGH WE HAVE FAILED TO FOLLOW HIM IN INNOCENCE,
WE MAY IMITATE HIM IN PENITENCE.

GRANT US, O LORD,
THAT BY THE EXAMPLE OF SAINT ALOYSIUS,
WE MAY TAKE OUR PLACE AT THE HEAVENLY BANQUET,
CLOTHED IN OUR WEDDING GARMENT,
SO THAT, BY PARTICIPATION IN THIS MYSTERY,
WE MAY POSSESS THE RICHES OF YOUR GRACE.

BRING US, WHO HAVE BEEN FED
WITH THE FOOD OF ANGELS, O LORD,
TO SERVE YOU IN PURITY OF LIFE,
AND FOLLOWING THE EXAMPLE OF SAINT ALOYSIUS,
WHOM WE HONOR TODAY,
MAY WE PERSEVERE IN CONSTANT THANKSGIVING.

Prayer for Saint Aloysius or for anyone else that you want to offer it for!

Volume 26 – June 27, 1929
Having received Holy Communion, I was offering my Holy Communion for the glory of
Saint Aloysius (__________), and I offered It, as a present for him/her,
everything that Our Lord had done in His Divine Will with His mind,

with His words, His works and His steps, for the accidental glory of
Saint Aloysius (___________) on this his/her feast day.

Now, while I was doing this, my sweet Jesus, moving in my interior,
told me: