Feast of The Immaculate Heart of Mary in the Divine Will 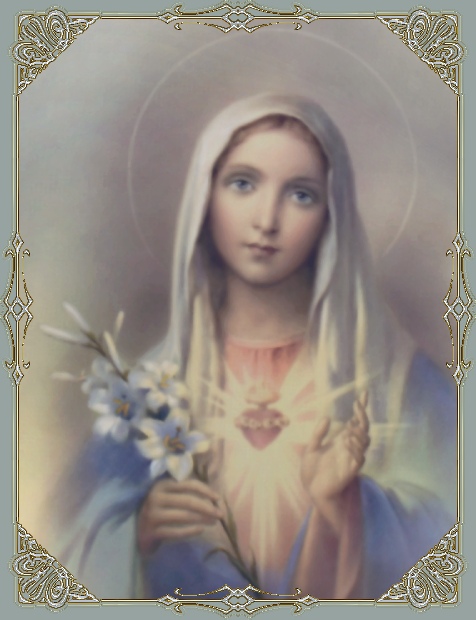 ring them in her heart.

Luke 2:35: And thy own soul a sword shall pierce, that, out of many hearts thoughts may be revealed.

to Nazareth and was subject to them. And his mother kept all these words in her heart.
Devotion to the Sacred Heart of Jesus focuses mostly on His divine love for mankind and encourages our humility, gratitude, obedience, and adoration; devotion to the Immaculate Heart of Mary focuses on Mary’s love for God and encourages our emulating her humility, gratitude, obedience, and adoration. Mary as loving Mother of Jesus Who suffered for us; Mary as Mother of the Church; Mary as obedient daughter, Mary as our Gevirah (Queen Mother of Israel) — we ponder her interior life in each of these roles, consecrate ourselves to Jesus through her, make reparations for offending her as our Mother, ask her intercession for us

with her Son, and emulate her as the model of Christian perfection.

The Feast of Candlemas, which commemorates Mary’s ritual Purification and her Presentation of Jesus in the Temple, sheds special light on the nature of devotion to her Immaculate Heart. The old man, Simeon, foretold that “a sword” shall pierce Mary’s heart, and meditating on the sorrows symbolized by that sword helps us to understand what Our Lord went through for us. We do this not only on Candlemas, but on the Feast of the Seven Sorrows, during all of Passiontide, as we make the Stations of the Cross, during August, which is devoted to the Immaculate Heart, during September, which is devoted to the Seven Sorrows, etc.

While, early on, of course, the Church Fathers wrote of Mary’s blessedness, purity, and sorrows, and our Saints — Dominic, Gertrude, Thomas Becket, Bridget, Bernardine of Siena, Louis de Montfort — have always had deep Marian devotions, it was after the apparitions of Mary experienced by St. Catherine Labouré at Rue Du Bac, Paris in 1830 that devotions specifically to Mary’s Immaculate Heart became formalized.

Mary appeared to St. Catherine Labouré standing on a globe, rays of light streaming from her fingers, enframed in an oval frame inscribed with the words, “O Mary, conceived without sin, pray for us who have recourse to thee.” The whole vision “turned” showing the back of the oval inscribed with the letter “M” entwined with a Cross, and the hearts of Jesus and Mary, the former surrounded with thorns, the latter pierced with a sword. 12 stars circled this oval frame. Mary told her to strike a medal in this form — a medal now known as the “Miraculous Medal” — and that all who wore it properly after having it blessed would receive graces. The wearing of the Miraculous Medal has become one of the most common devotions to the Immaculate Heart.

Devotion to the Immaculate Heart became even more popularized after Mary’s appearing to the three young shepherd children at Fatima, Portugal in 1917 (before the Russian Revolution), when she asked that Russia be consecrated to her Immaculate Heart to prevent the spread of “the errors of Russia.” Eight years later, in 1925, Mary appeared to one of the visionaries — Lucia, who’d since become a nun — and requested reparations for the various ways in which her Immaculate Heart was offended — such as attacks against her Immaculate Conception, virginity and divine maternity, and for those who teach their children contempt of Mary or who insult her by desecrating her images.

To make these reparations, she asked that we do 5 things, all with the intention of making reparation to her Immaculate Heart:

The “First Saturdays of Reparation” was not a new devotion, but it was even more popularized after Our Lady appeared at Fatima. It consists of, on the first Saturday of each month for five consecutive months:

The promise given by Mary to those who make the First Saturday devotion is her assistance at the hour of their death.