Fourth Apparition of Our Lady of Fatima – August 19th 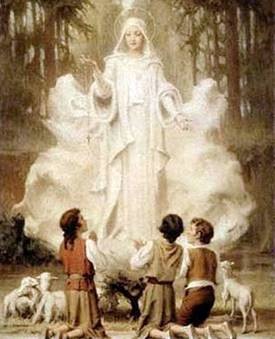 In honor of the August 19 Apparition of Our Lady of Fatima to the children:

“I Myself will Gather the remnant of My Flock from all the lands
to which I have Banished them and Bring them Back to their folds;
there they shall be Fruitful and Multiply.” – Jer 23:3

V12 – 12.16.18 – Now I want to tell you something consoling. Italy and France now lose, while Germany wins. All nations have some black stains, and All of them deserve Humiliations and Crushings. There will be a general uproar – confusion everywhere. I will Renew the world with the Sword, with Fire and with Water, with sudden deaths, and with contagious diseases. I will make New Things. The nations will form a sort of tower of Babel; they will reach the point of being unable to understand one another; the peoples will revolt among themselves; they will no longer want kings. All will be Humiliated, and Peace will Come Only from Me. And if you hear them say ‘peace’, that will not be True, but apparent. Once I have Purged Everything, I will Place My Finger in a Surprising Way, and I will Give the True Peace. Then, all those who are Humiliated will return to Me. Germany will be Catholic; I have Great Designs upon for her. England, Russia, and all the places where blood has been shed, will rise again to Faith, and will be incorporated into My Church. There will be Great Triumph and union among peoples. Therefore, Pray – and it takes Patience, because this will not be so soon, but it will take time.”

V15 – 3.23.23 – “My daughter, I was the First King of Sorrows, and being Man and God, I had to Centralize Everything within Me in order to have Primacy over Everything, even over sorrows. Those of My Mama were nothing other than the Reverberations of Mine which, being Reflected in Her, made Her Share in All My Sorrows which, Piercing Her, Filled Her with such Bitterness and Pain that She felt Herself Dying at each Reverberation of My Sorrows. But Love Sustained Her and Gave Her Life again. Therefore, not only for Honor, but also by Right of Justice, She was the First Queen of the Immense Sea of Her Sorrows.” While He was saying this, I seemed to see my Mama in front of Jesus, and Everything that Jesus Contained, the Sorrows and the Piercings of that Most Holy Heart, were Reflected in the Heart of the Sorrowful Queen. At those Reflections, many Swords Formed in the Heart of the Pierced Mama; and these Swords were Marked by a Fiat of Light, in which She was Circumfused, in the Midst of So Many Fiats of Most Refulgent Light which gave Her So Much Glory that there are no words to narrate it.

Then, Jesus continued, Saying: “It was not the Sorrows that Constituted My Mama as Queen and made Her Shine with So Much Glory, but it was My Omnipotent Fiat, which was Braided to Her every Act and Sorrow, and Constituted Itself Life of each of Her Sorrows. So, My Fiat was the First Act that Formed the Sword, giving Her the Intensity of Pain It Wanted. My Fiat could Place All the Sorrows It Wanted in that Pierced Heart, adding Piercings upon Piercings, Pains upon Pains, without a shadow of the slightest resistance. On the contrary, She felt Honored that My Fiat would Constitute Itself Life of even a Heartbeat of Hers; and My Fiat gave Her Complete Glory and Constituted Her True and Legitimate Queen.

Now, who will be the souls in whom I can Reflect the Reverberations of My Sorrows and of My Very Life? Those who will have My Fiat as Life. This Fiat will make them absorb My Reflections, and I will Be Generous in Sharing with them that which My Will Operates in Me. Therefore, in My Will do I Await souls, to Give them the True Dominion and the Complete Glory of each Act and pain that they may suffer. The operating and suffering outside of My Will I do Not Recognize; I could say: ‘I have Nothing to Give you; what is the will that animated you in doing and suffering this? Get your reward from that one.’ Many times, doing good or suffering, if My Will is not Present in them, can be miserable slaveries which degenerate into passions, while it is My Will Alone that Gives True Dominion, True Virtues, True Glory, Such as to Transform the human into Divine.”

V15 – 4.2.23 – Now, while He was Saying this, Together we went Round the earth for a little while, but – oh, what fright! Many wanted to wound my Beloved Jesus – some by knife, and some by sword. And among them, there were bishops, priests, religious, who wounded Him Deep into His Heart, but with such torture as to strike fright. Oh! how He Suffered and threw Himself into my arms to be Defended. I pressed Him to myself and prayed Him to let me Share in His Pains. He made me content by Piercing my heart through with such Vehemence, that I felt a deep wound within me for the whole day, and Jesus Came back repeated times to Wound me.

Now, the following morning, as I was feeling strong pain, my Sweet Jesus Came back, Saying to me: “Let me see your heart.” And while He was Looking, He told me: “Do you want Me to Heal you in order to relieve you from the pain you are suffering?” And I: ‘My Highest Good, why do You want to Heal me? Am I not worthy of suffering for You? Your Heart is All Wounded, and mine, compared to Yours – oh! how scarce is my suffering. Rather, if it pleases You, Give me more pains.’ And He, Squeezing me All to Himself, Continued to Pierce my heart through with more pain, and then He Left me. May Everything be for His Glory.

Abba Father,
In the Name of Jesus,
in the Unity, Power and Love of the Holy Spirit,
Under the Mantle of the Blessed Virgin Mary,
with All the Angels and Saints,
through the intercession
of the little daughter of the Divine Will,
Luisa Piccarreta,
Please Accept this Solemn Act
of Reparation and Consecration
of Russia, the United States and All Nations,
with All peoples, past, present and future,
as we Honor the 100th Anniversary
of Our Lady of Fatima.

On behalf of all mankind we beg You,
Come Holy Spirit!
May this Consecration hasten the
Triumph of the Immaculate Heart of Mary
and the Eucharistic Reign of the Sacred Heart of Jesus.

May the Coming of the Kingdom,
and of the Fulfillment of the prayer to You,
Our Heavenly Father,
“May Your Will be done on earth as it is in Heaven”
be accomplished and completed
in Your Most Holy Divine Will.
WE BELIEVE, WE RECEIVE!