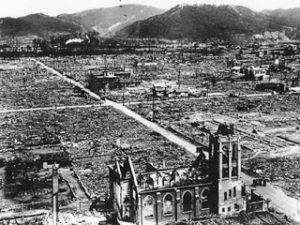 Hikoka Vanamuri, former Professor of Philosophy at the University of Tokyo, was interviewed while on pilgrimage in Fatima. This is what he had to say:“I’ll never return to Japan. After years of study, after years of meditation I have understood that life under the tainted atmosphere of Buddha is an embittered historical testimony of blatant paganism. I converted to Catholicism. I made this decision after the explosion of the atomic bomb on Hiroshima. I was in Hiroshima for historical research. I was in the library when the bomb exploded. I was busy consulting a Portuguese book and my eye happened to catch an image of Our Lady of Fatima.  I had the impression that this image moved, as if to say something. All of a sudden there was a blinding light, hurting my eyes intensely. I was terrified. The cataclysm had come about. The sky had darkened and a cloud of brown dust had covered the city. The library was burning. Men were burning. Children were burning. The air itself was burning.  I didn’t even have  the slightest scratch on me.   The sign of the miracle was evident.  Yet I wasn’t able to explain what had happened.

Can a miracle be explained? I wasn’t even able to think. Only the image of Our Lady of Fatima shone for me above  all the flames, above all the fires, above all man’s acts of barbarism. There is no question that I was saved  to bring the Virgin’s testimony to the entire world.  Doctor Keia Mujnuri, a friend I went to visit fifteen days later, verified through X-Rays that my body had not been subjected to any burns. The barrier of mystery was shattered. I began to believe in the beauty of  love. I learned the Catechism but in my heart I kept Her image, the sweet song of Fatima. I wanted to confess to the Lord, but I wanted this through His Most Holy Mother. (from: nelcuoredimaria).