Sunday, on March 4, the Eucharistic Celebration

Sunday, on March 4, the Eucharistic Celebration in the Church of Santa Maria Greca, concluded the week of spirituality that was entirely dedicated to the Servant of God Luisa Piccarreta, on the 71th anniversary of her departure to Heaven. The Holy Mass was concelebrated by don Sergio Pellegrini, don Marco Cannavò and Father Thomas Celso who was in Corato with our other brothers of the Divine Will, coming from the United States.

The week of obedience is very dear to the Association Luisa Piccarreta and it has the merit of having organized it. The numerous moments of prayer and meditation happened in the places 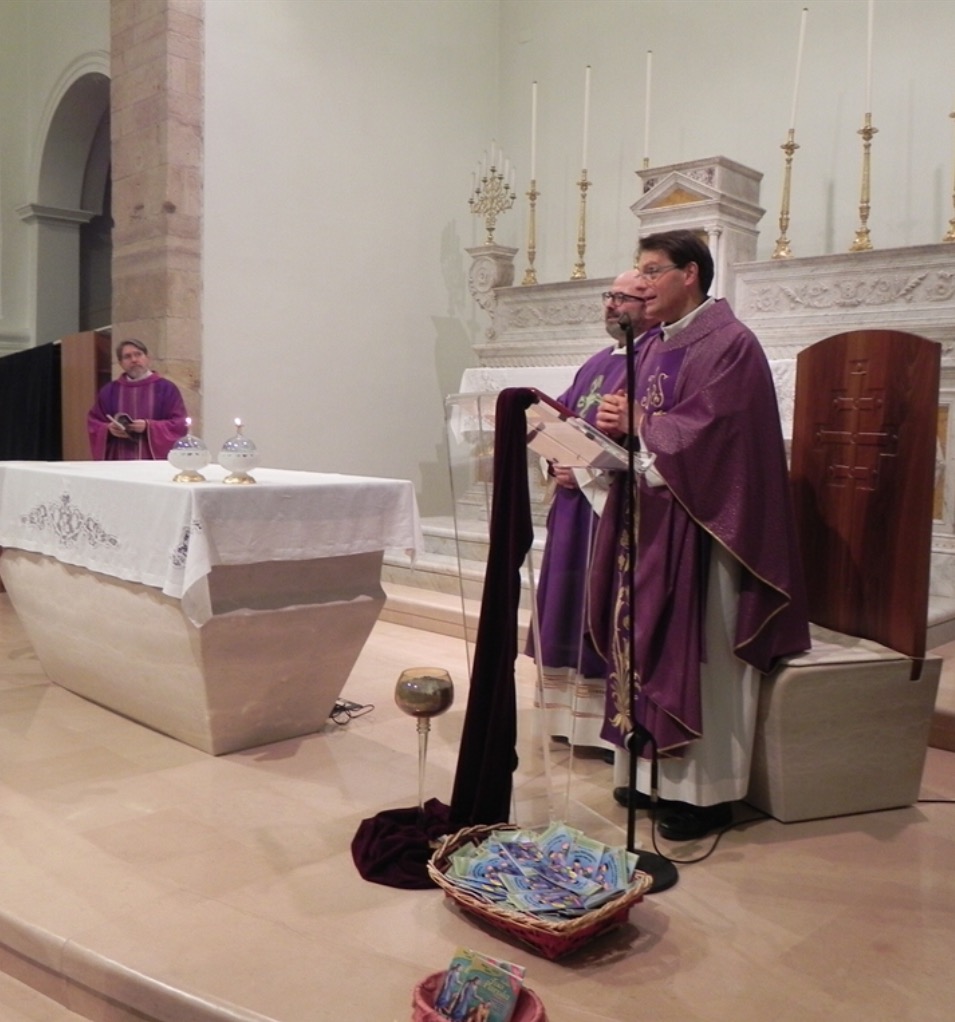 where Luisa lived or where, from now, her name will return to resonate stronger than ever and, who knows, to burn in the hearts the divine fire that characterized the whole life of the little daughter of the Divine Will.

In his homily, don Sergio began with the Gospel of John (Jn 2: 13-25) in which Jesus overturned the tables of the money changers. They turned the Temple, His Father’s house of prayer, into a market, and deformed, for their interests, the true nature of that holy place.

Then don Sergio immediately referred to a passage written by Luisa, in which the human will is symbolized by a rotten seed,  and how the Divine Will has the virtue of restoring the original life of that seed.

The Divine Will has the virtue of purifying, clearing up, embellishing and changing nature itself. The human will is like a seed which is rotten inside, while on the outside it appears to be good. The clothing that covers the seed seems to be in good conditions, but if the clothing is removed, one finds that the seed is, in some half putrefied, in some empty. Others, then, while the seed possesses life, do not expose it to the sun or to the wind, and so it will end up rotting completely. But if it is exposed to the sun and to the wind, through light, heat and wind, they will rip the rotten part off, they will purify it, and give it new life.

Such is the human will – a rotten seed, full of smoke, of rot, and half putrefied. However, not all seeds are completely dead – some have a thread of life; and if these seeds which possess this thread of life are exposed to the Sun of the Divine Will, Its light, Its heat and Its penetrating and ruling wind will invest the seed of the human will, and the light and heat will clear up the seed, removing what is rotten. They will fill it with life, and the ruling wind of the Fiat will play with it, raising it so high as to enclose it in that Fiat from which it came out; and with Its virtue, It will change the nature of the seed, giving it its original life. Everything is in exposing oneself to the Sun of the Divine Will and to the burning and refulgent rays of Its knowledges, letting oneself be invested by them, caressed by Its light, warmed by Its heat, so that the Kingdom of the Divine Will may come upon earth.

In those days we prayed a lot in the places that are dear and familiar to Luisa. First of all, the Church of Saint Joseph where don Gianni Cafagna (parish priest of the Church of Saint Joseph in Corato) and don Sergio concelebrated the Mass on February 28. They recalled the figure of don Gennaro de Gennaro, the second confessor of Luisa, who played a decisive role in the development of Luisa’s specific mission. On February 28, 1899 Luisa began to write the first pages of her diary, to obey her new confessor don Gennaro.

In the homily of that day, don Sergio referred to the state of victim of Luisa. She was a voluntary victim, she was a soul that wished to suffer like her Lord, because she loved Him and also because she wanted to redeem and repair for those souls who live detached from the mystical body of our Lord.

The next day, in the morning, we lived the second moment of prayer with the Eucharistic Celebration broadcast on Radio Maria in the Church of St. Maria Greca, where Luisa’s remains lie. On March 2, we went to the Institute of The Daughters of Divine Zeal, the house where Luisa spent 10 years of her life. In that context, don Sergio inevitably referred to Saint Hannibal Mary of France as another attentive and zealous figure who accompanied Luisa. Don Sergio also spoke of the profound friendship between Saint Hannibal and Luisa: “It is a divine friendship that is not human, it is a friendship that sparkles, it is a friendship between two holy souls – he reiterated – because they know what they are talking!”

It is a relationship that is guided from On High.; it has inside it not a human love, but the unconditional love of God. This love is not preferential, it makes no difference. «If God loves unconditionally, even in the face of evil, – as shown by the Gospel – so we also ought to love one another – don Sergio continued – the “loop” is not formed by God and me, but God → me →  my brother → God … And this means merging into the Divine Will – the message that Luisa left to us – … my will merges with that of God … the soul enters the Divine Will, she presents herself before the throne of God and carries with her all the humanity, all Creation, all works, all that exists. Then she moves away from God to bring the grace of God to all people so that God can be loved in each creature with His own love. Merging involves others. How can we merge into the Divine Will if we do not bring all of us? The love of God is for everyone, so everything must return to God. God does not favor some at the expense of others – this should be our love – This is the love that exists between the Saints, and that’s what happened between Luisa and the Saint from Messina, but also between Luisa, her confessors her disciples“.