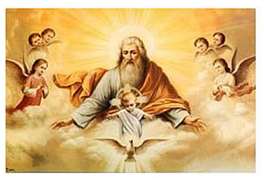 January 10, 1938
The first sermon that the little King Jesus gave to the children of Egypt.  How each of them had their Celestial Father in their heart, Who loved them and wanted to be loved.

I was doing the round in the Divine Fiat, and – oh! how I yearn that not one act would escape me of what It has done, both in Creation and in Redemption.  It seems to me that I lack something if I do not recognize It, love It, kiss It and clasp It to my heart in everything It has done, as if it were my own.  And the Divine Volition would remain as though displeased if one who lives in It does not know all of Its acts, and if It does not find, in everything It has done, the little ‘I love You’ of the one whom It so much loves and for whom there is nothing It has not done.

So, I came to follow that point when the Celestial Child was in Egypt, in the act of taking His first steps; and I kissed His steps, I placed my ‘I love You’ at each step He was taking, and I asked Him for the first steps of His Will for all human generations.  I tried to follow Him in everything; if He prayed, if He cried, I asked that His Will would animate all the prayers of creatures, and that His tears would regenerate the Life of Its Fiat in the human family.  Then, while I was attentive in following Him in everything, the little Baby King, visiting my poor soul, told me:  “Daughter of my Will, how happy I am when the creature does not leave Me alone – I feel her behind Me, in front of Me, and in all my acts.  Now, you must know that my exile in Egypt was not without conquests.  When I reached the age of about three years, from our little hovel I could hear the children playing and shouting in the street; and I, little as I was, would go out into their midst.  As they would see Me, they would run around Me, and each one wanted to get the closest to Me, because my beauty, the enchantment of my gaze, the sweetness of my voice, were such that they felt captivated to love Me.  Therefore they would throng around Me, and they loved Me so much that they were unable to detach from Me.  Now, I too loved these children; and since, when love is true, it tries to make itself known – not only this, but to give what can make one happy in time and eternity – I gave to these little ones my first little sermon, adapting Myself to their small capacity; more so since, possessing innocence, they could more easily understand Me.

Now, do you want to know what my sermon was about?  It said to them:  ‘My children, listen to Me; I love you very much and I want to make known to you your origin.  Look at the heavens – up there you have a Celestial Father who loves you very much.  But He loves you so much, that He was not content with being your Father from Heaven, guiding you, creating for you a sun, a sea, a flowery earth to make you happy; but loving you with exuberant love, He wanted to descend into your hearts, to form His Royal Palace in the depth of your soul, making Himself sweet prisoner of each one of you.  But to do what?  To give life to your heartbeat, breath and motion.  So, as you walk, He walks in your steps, He moves in your little hands, He speaks in your voice; and as you walk, as you move, because He loves you very much, now He kisses you, now He squeezes you, now He hugs you and carries you as though in triumph as His own dear children.  How many hidden kisses and hugs does this Celestial Father of ours not give you!  And you, because you were inattentive, have not let your kiss meet His, or your hugs encounter His paternal embrace; and He has remained with the sorrow that His children have neither kissed Him nor hugged Him.

Now, my dear children, do you know what this Celestial Father wants from you?  He wants to be recognized in you, as having His dwelling in the center of your soul; and since He gives you everything, nor is there anything He does not give you, He wants your love in everything you do.  Love Him – let love never depart from your little hearts, from your lips, from your works – from everything; and this will be the delicious food you will give to His Paternity.  He loves you very much and wants to be loved.  No one can arrive at loving you as He loves you.  This is so true, that while you also have a terrestrial father, yet how different from the Love of the Celestial Father.  He does not always follow you, does not watch over your steps, does not sleep together with you, nor does he palpitate within your heart; and if you fall, he does not even know anything about it.  On the other hand, your Celestial Father never leaves you; if you are about to fall, He gives you His hand so as not to let you fall; if you sleep, He watches over you; and even if you play and do some impertinences, He is with you and knows everything you do.  Therefore love Him very, very much.’  And becoming more enflamed, I would say to them:  ‘Give Me your word that you will love Him always – always.  Say together with Me:  “We love You, our Father who are in Heaven.  We love You, our Father who dwell in our hearts”.’

My daughter, at my speaking, some of the children would be moved, some would cry of joy, some would remain enraptured, some would cling to Me so strongly, that they did not want to leave Me any more.  I made them feel the palpitating Life of my Celestial Father in their little hearts, and they rejoiced and made feast, because they no longer had a Father far away, but inside their own hearts.  And I, to fortify them and give them the strength to depart from Me, would bless them, renewing upon those children Our Creative Strength, invoking the Power of the Father, the Wisdom of Myself, the Son, and the Virtue of the Holy Spirit; and I would say to them:  ‘Go – and then you will return.’  And so they would leave.  But then they would come back the following days, almost in throngs – a crowd of children.  They would set themselves to spy when I was to go out, and to see what I was doing inside our hovel.  And when I went out they would clap their hands, make feast for Me, and shout so loudly, that my Mother would come out the door to see what was happening.  And, oh! how enraptured She would remain, in seeing Her little Son speaking to those children with so much grace; so much so, that She felt Her Heart burst with love, and could see in them the first fruits of my Life down here, because, of these children who listened to Me – no one was lost.  Knowing that they had a Father inside their hearts was like a pledge for them to be able to possess the Celestial Fatherland, to love that Father who already dwelt also in Heaven.

My daughter, this sermon of Mine which I, a little Child, gave to the children of Egypt, was the foundation, the substance of the creation of man; it contains the most necessary doctrine, the highest sanctity; it makes love arise in each instant, for the Creator and the creature to love each other.  What sorrow in seeing many little lives that do not know the Life of a God in their souls.  They grow up without Divine Paternity, as if they were alone in the world; they do not feel or know how much they are loved.  How can they love Me?  So, once love is taken away, the heart hardens, life becomes degraded, and – poor youth – they give themselves prey to the gravest crimes.  This is a sorrow for your Jesus, and I want it to be a sorrow for you, that you may pray for many who teach that I am present in their hearts, that I love and want to be loved.”