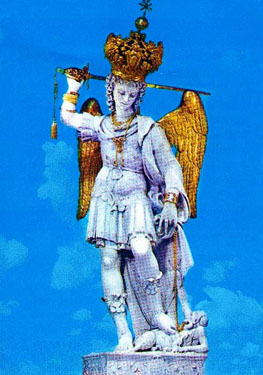 May 8 Feast of the Apparition of St. Michael (victory) – Gargano

While St. Michaels’ Feast Day is September 29, the feast of the Apparition of Saint Michael on May 8 commemorates the 6th century appearance of the archangel on Mount Gargano near Manfredonia in southern Italy. A church was built in his honor at the site. Medals or holy cards with ‘relics’ of Michael are probably rock chips from the cave where he appeared or pieces of cloth that have touched it.

Linked to little mamma Luisa while being united in God’s Most Holy Divine Will under the Sacred Heart of Jesus and the and Immaculate Heart of Mary with all souls past, present and future with all the Heavenly Hosts and one with the voice of all creation, we kneel before the Throne of Our Triune God and pray:

Almighty God, Saint Michael led the army of angels that defeated Satan and the demons when they rebelled against You. Because his name means “Who is like God,” Pope Saint Gregory the Great said, “Whenever some act of wondrous power must be performed, Michael is sent, so that his action and his name may make it clear that no one can do what God does by his superior power.” I ask Saint Michael to lead an army of angels in my defense whenever I am being seduced by Satan’s wiles or crushed by the weight of his evil power. You, O Lord, are always victorious in my life! Saint Michael, pray for me (and O Dearest St Michael: always pray for and protect us and our family!) Amen.

Saint Michael, the Archangel, defend us in battle. Be our safeguard against the wickedness and snares of the devil. May God rebuke him, we humbly pray; and do you, O Prince of the heavenly host, by the power of God cast into hell Satan and all the evil spirits who wander through the world seeking the ruin of souls, Amen.

Dear Saint Michael,
always be with us and protect us with your legions of angels

all for the greater honor and glory of God!

In the year 492 a man named Gargan was pasturing his large herds in the countryside. One day a bull fled to the mountain, where at first it could not be found. When its refuge in a cave was discovered, an arrow was shot into the cave, but the arrow returned to wound the one who had sent it. Faced with so mysterious an occurrence, the persons concerned decided to consult the bishop of the region. He ordered three days of fasting and prayers. After three days, the Archangel Saint Michael appeared to the bishop and declared that the cavern where the bull had taken refuge was under his protection, and that God wanted it to be consecrated under his name and in honor of all the Holy Angels.

Accompanied by his clergy and people, the pontiff went to that cavern, which he found already disposed in the form of a church. The divine mysteries were celebrated there, and there arose in this same place a magnificent temple where the divine Power has wrought great miracles. To thank God’s adorable goodness for the protection of the holy Archangel, the effect of His merciful Providence, this feast day was instituted by the Church in his honor.

It is said of this special guardian and protector of the Church that, during the final persecution of Antichrist, he will powerfully defend it: “At that time shall Michael rise up, the great prince who protects the children of thy people.” (Dan. 12:1) Compare this text with Chapter 10 of the Apocalypse of Saint John.

Many churches, chapels and oratories were dedicated to Saint Michael in the whole of Europe.

The Archangel is often represented on the spires of the bell-towers, because he is considered the guardian of churches against Satan.

Furthermore many ossuary chapels in cemeteries are dedicated to him.

Many cities in Europe (Jena, Andernach, Colmar) venerate him as their patron saint; in Italy we find more than 60 localities under his protection (amongst which are Caserta, Cuneo, Alghero, Albenga, Vasto…). Whole nations entrusted themselves to him, such as the Longobards and sovereigns, such as Charles d’Anjou, great protector of the Shrine of the Gargano, and those who reigned in the Valois dynasty.

Saint Michael is also the protector of many categories of workers: chemists, gilders, merchants, manufacturers of scales, judges, fencing instructors, radiologists. The police and parachutists of France and Italy have entrusted themselves to his protection.

The Jews already considered Michael the Archangel as Prince of the Angels, Protector of the chosen people and the symbol of powerful divine assistance towards Israel. He appears three times in the Old Testament, particularly in the book of Daniel (Dan 10, 13-21; 12, 1) where he is indicated as the defendant of the Hebrews and the supreme head of the heavenly army who defends the weak and the persecuted.

His name Mi ka – ‘El means Who is like God? Saint Michael has the title of Archangel attributed to him, the same title given to Gabriel – strength of God and Raphael – God heals. In the New Testament, Saint Michael the Archangel is presented as the adversary of the devil, victor of the last battle against Satan and his supporters.

We find the description of the battle and his victory in Chapter 12 of the Apocalypse:

“And there was a battle in heaven; Michael and his angels battled with the dragon, and the dragon fought and his angels. And they did not prevail neither was their place found any more in heaven. And that great dragon was cast down, the ancient serpent he who is called the devil and Satan, who leads astray the whole world; and he was cast down to the earth and with him his angels were cast down.

And I heard a loud voice in heaven saying, Now has come the salvation, and the power and the kingdom of our God, and the authority of his Christ for the accuser of our brethren has been cast down, he who accused them before our God day and night. And they overcame him through the blood of the Lamb and through the word of their witness, for they did not love their lives even in face of death. Therefore rejoice, O heavens, and you who dwell therein. Woe to the earth and to the sea because the devil has gone down to you in great wrath, knowing that he has but a short time.”

Therefore Christians consider the Archangel Saint Michael as the most powerful defender of God’s people.