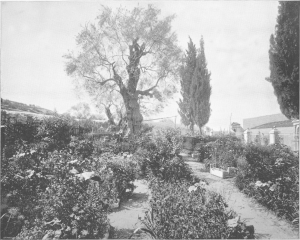 The Garden of Gethsemane

For nearly sixteen hundred years this Garden of Gethsemane, in the Valley of Kedron, has been fixed by the devout as the place of the prayer of our Savior at the time of his “agony” just before his death. John says: “Jesus went forth with his disciples over the brook Kedron, where was a garden into which He entered with his disciples.” Mark says: “And they came to the place which was named Gethsemane, and He said to his disciples, Sit ye here while I shall pray.” Since the days of the visit of the Empress Helena to Jerusalem, in the fourth century, this garden has been identified by tradition. The Valley of Kedron (Jehoshaphat) is here deep and narrow, and Gethsemane occupies about an acre of ground, to the north of which are rugged and barren heights in which the kings of Jerusalem are buried. To the west are the massive walls of Jerusalem. To the east, and rising directly above it about three hundred feet, is the Mount of Olives. The Valley of the Kedron falls into a deep ravine to the south. We have above a view of the garden within, taken by our artist on the 27th of April, 1894. It is a beautiful spot; the trees are very venerable, although they can not have been the identical trees which overshadowed the Son of Man in that hour of his distress. Those who are familiar with Eastern life will easily understand that Christ would often find rest and sleep and opportunity for devotion on the hillside and under the open canopy of heaven. “Nearly all the inhabitants of Palestine sleep, during the greater part of the year, in the open air.”

From the Hours of the Passion: