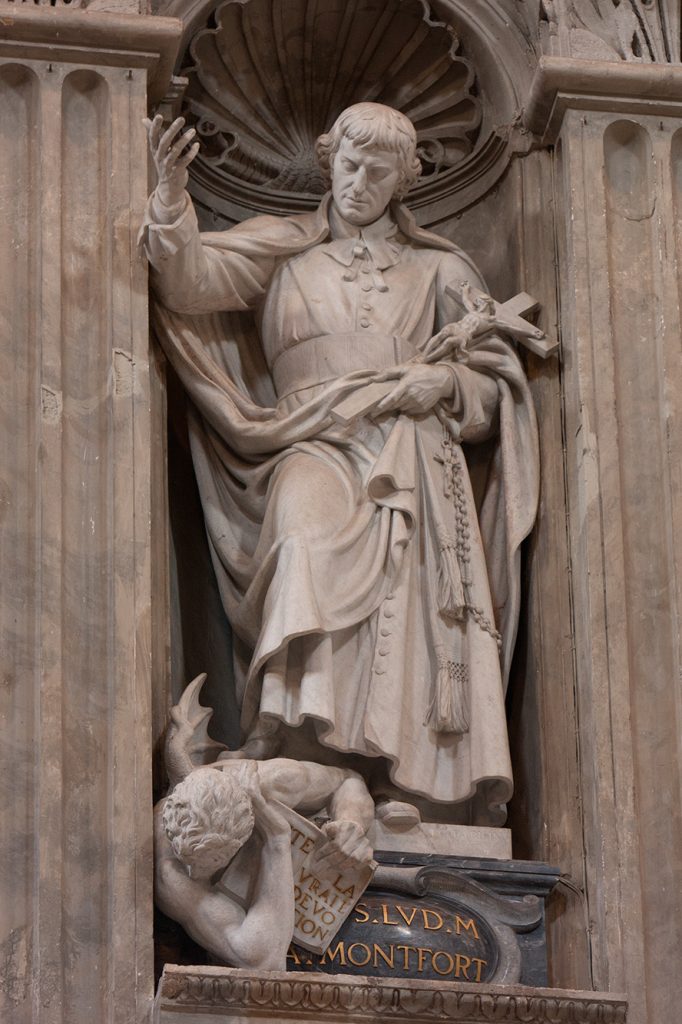 Saint Louis-Marie Grignion de Montfort included a chapter on Mary’s role in the last days which stressed the necessity of appealing to Her intercession in order to combat the forces of Satan.

He believes that the latter days will be marked by steadily increasing periods of persecution of Christians that will not end until the time of the Antichrist and explains Genesis 3:15 in light of these persecutions:

51. It is chiefly in reference to these last wicked persecutions of the devil, daily increasing until the advent of the reign of anti-Christ, that we should understand that first and well-known prophecy and curse of God uttered against the serpent in the garden of paradise. It is opportune to explain it here for the glory of the Blessed Virgin, the salvation of her children and the confusion of the devil. “I will place enmities between you and the woman, between your race and her race; she will crush your head and you will lie in wait for her heel” (Gen. 3:15).

52. God has established only one enmity – but it is an irreconcilable one – which will last and even go on increasing to the end of time. That enmity is between Mary, his worthy Mother, and the devil, between the children and the servants of the Blessed Virgin and the children and followers of Lucifer.

Thus the most fearful enemy that God has set up against the devil is Mary, his holy Mother. From the time of the earthly paradise, although she existed then only in his mind, he gave her such a hatred for his accursed enemy, such ingenuity in exposing the wickedness of the ancient serpent and such power to defeat, overthrow and crush this proud rebel, that Satan fears her not only more than angels and men but in a certain sense more than God himself. This does not mean that the anger, hatred and power of God are not infinitely greater than the Blessed Virgin’s, since her attributes are limited. It simply means that Satan, being so proud, suffers infinitely more in being vanquished and punished by a lowly and humble servant of God, for her humility humiliates him more than the power of God. Moreover, God has given Mary such great power over the evil spirits that, as they have often been forced unwillingly to admit through the lips of possessed persons, they fear one of her pleadings for a soul more than the prayers of all the saints, and one of her threats more than all their other torments.

He explains that in the days leading to the Antichrist, a powerful group will emerge from among the clergy which, through their devotion to Mary, will be granted special powers to fight Satan:

56. But what will they be like, these servants, these slaves, these children of Mary?
They will be ministers of the Lord who, like a flaming fire, will enkindle everywhere the fires of divine love. They will become, in Mary’s powerful hands, like sharp arrows, with which she will transfix her enemies.

58. They will be true apostles of the latter times to whom the Lord of Hosts will give eloquence and strength to work wonders and carry off glorious spoils from his enemies. They will sleep without gold or silver and, more important still, without concern in the midst of other priests, ecclesiastics and clerics. Yet they will have the silver wings of the dove enabling them to go wherever the Holy Spirit calls them, filled as they are with the resolve to seek the glory of God and the salvation of souls. Wherever they preach, they will leave behind them nothing but the gold of love, which is the fulfillment of the whole law.

59. Lastly, we know they will be true disciples of Jesus Christ, imitating his poverty, his humility, his contempt of the world and his love. They will point out the narrow way to God in pure truth according to the holy Gospel, and not according to the maxims of the world. Their hearts will not be troubled, nor will they show favour to anyone; they will not spare or heed or fear any man, however powerful he may be. They will have the two-edged sword of the word of God in their mouths and the blood-stained standard of the Cross on their shoulders. They will carry the crucifix in their right hand and the rosary in their left, and the holy names of Jesus and Mary on their heart. The simplicity and self-sacrifice of Jesus will be reflected in their whole behaviour.

He also tells us:

47. “….towards the end of the world, ….Almighty God and His holy Mother are to raise up saints who will surpass in holiness most other saints as much as the cedars of Lebanon tower above little shrubs.”

48. “These great souls filled with grace and zeal will be chosen to oppose the enemies of God who are raging on all sides. They will be exceptionally devoted to the Blessed Virgin. Illumined by her light, strengthened by her spirit, supported by her arms, sheltered under her protection, they will fight with one hand and build with the other. With one hand they will give battle, overthrowing and crushing heretics and their heresies, schismatics and their schisms, idolaters and their idolatries, sinners and their wickedness. With the other hand they will build the temple of the true Solomon and the mystical city of God, namely, the Blessed Virgin… “

57. “They will be like thunderclouds flying through the air at the slightest breath of the Holy Spirit. Attached to nothing, surprised at nothing, they will shower down the rain of God’s word and of eternal life. They will thunder against sin; they will storm against the world; they will strike down the devil and his followers and for life and for death, they will pierce through and through with the two-edged sword of God’s word all those against whom they are sent by Almighty God.”

49. “Mary scarcely appeared in the first coming of Christ… But in the second coming of Jesus Christ, Mary must be known and openly revealed by the Holy Spirit so that Jesus may be known, loved and served through her.”