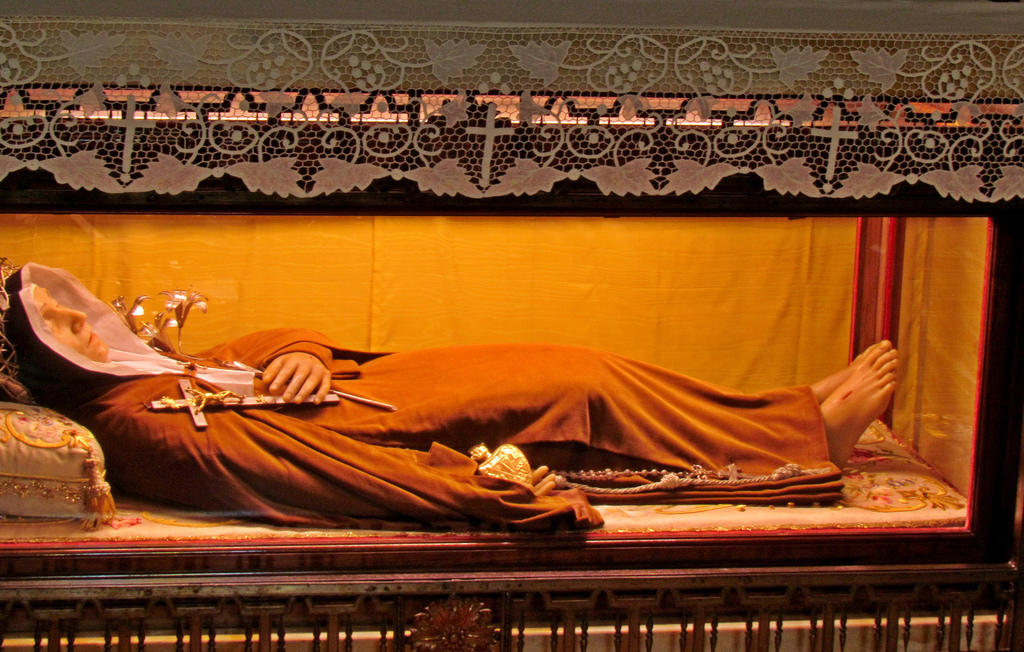 About Her Diary
St. Veronica left us a spiritual treasure, her Diary, which she wrote under obedience to her confessor, Fr. Gerolamo Bastianelli. She began writing it in April, 1693 and finished writing it thirty four years later in 1727. She wrote a total of twenty-two thousand pages. This was a great penance for her. She did not neglect her other duties and would write late at night in her cell. The devil would often try to scare her to disrupt her writing. He would hide and break her pencils, and sometimes even attacked her physically: “After Matins, when I wanted to make an act of obedience and write for a quarter of an hour, I suddenly got a big punch in the eye and heard a voice saying, ‘damned writings!’” During the last fifteen years of her life, Veronica was so ill that a painting of Our Lady of Sorrows in her cell would come to life, and the Blessed Virgin Mary herself dictated to her the last chapters of the Diary.

Jesus made two promises to Veronica about this diary: “The Lord himself made me understand I should write everything; because He wanted it thus; and that these writings would be of great benefit to many souls; and that he wanted it to be for the whole of Christianity.” And on another occasion Jesus told her: “I inform you that I want to give special graces to whomever will trouble himself with this work. And I want everything, everything revealed. These are My works, My gifts, they are My singular graces, and all shall be for My glory.”

It is interesting to note that both saints and mystics have been entrusted with the publication of this diary. It was not until one hundred and fifty years later that Francois Dausse started to work on its publication, but his work remained unfinished because of his death. After this, St. Annibale Maria di Francia started working on this diary and managed to publish the first volume under the title, A Hidden Treasure, The Diary of St. Veronica Giuliani (1891-92). However, St. Annibale had to stop working on this Diary because the local Bishop asked him to start reviewing the writings of mystic, Luisa Picarreta in order to give them the Nihil Obstat and Imprimatur. Later, a Jesuit priest, Pietro Pizzicaria, managed to publish the next 8 volumes under the same title before he died and the last two volumes were published by Professor Umberto Bucchioni in 1927.